NATO from its inception to the end of the Cold War

The North Atlantic Treaty, which established the North Atlantic Treaty Organization, was signed in Washington on 4 April 1949 by 12 countries: Belgium, Canada, Denmark, France, Iceland, Italy, Luxembourg, the Netherlands, Norway, Portugal, the United Kingdom and the United States. Article 5 of the Treaty defines the collective defence commitment: "an armed attack against one or more of [the Parties] in Europe or North America shall be considered an attack against them all".

The Alliance quickly established a military command structure, initially based at Rocquencourt near Paris (SHAPE, Supreme Headquarters Allied Powers Europe), with General Dwight D. Eisenhower as the first Supreme Allied Commander Europe (SACEUR), and an international civilian staff with an HQ initially based in Paris (at the Palais de Chaillot until 1959 and then at Porte Dauphine). 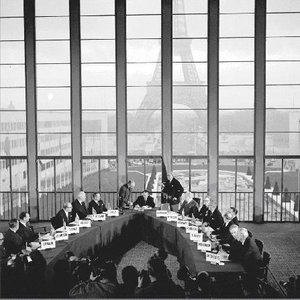 In 1966, France announced that it would withdraw from the Alliance’s integrated military command, and as a result the NATO HQ moved to the sites in Evere and Mons, Belgium, which it still occupies today. France rejoined NATO’s military structure in 2009.

With the end of the Cold War, NATO redefined its role and missions, although the defence of Allies’ territory remained its primary role. The Allies then decided to establish partnerships with the former members of the Warsaw Pact and, in addition, with third countries which could contribute to Euro-Atlantic security. The Alliance also expanded as former members of the Eastern bloc joined NATO. NATO also began conducting its first crisis management operations in 1993 in the Balkans.

The new missions and tools of the Alliance

While during the Cold war, NATO - a solely defensive Alliance - did not take part in a single military action, the international community is confronted at the beginning of 1990s with new challenges and threats that lead the Organization to launch several military operations.

At the 1999 Washington Summit the Alliance, recognizing the changes in its security environment and the missions entrusted to it, adopted a new Strategic Concept defining NATO’s tasks and objectives. Ten years later, at the Strasbourg-Kehl Summit (2009), the Allies tasked a group of experts led by the former US State Secretary Madeleine Albright to produce a report on the functioning and the objectives of the Alliance. As a result, the Allies adopted the current Strategic Concept at the Lisbon Summit of 2010. Entitled "Active Engagement, Modern Defence", it sets out three fundamental tasks that govern NATO’s action : collective defense, crisis management and cooperative security.

In parallel, NATO adapted its means of action to suit its new security environment: in particular, Allies decided at the 2002 Prague Summit to create the NATO Response Force (NRF), a multinational force (with nations contributing on a rotational basis) of 25,000 personnel capable of rapid deployment for collective defence purposes or for crisis management operations.

In order to rationalize and modernize the military structures inherited from the Cold war, Allies decided at the Prague summit to abolish the geographical division of the command structure, split between the center-European and Mediterranean theatre on one hand, and the Atlantic Ocean theatre on the other hand. From this day, the command structure relies on a functional distribution between the Operational Command (ACO) and a new Allied Command for Transformation (ACT), based in Norfolk in Virginia. ACT is controlled since 2012 by a French General, whose role is to manage the adaptation of NATO’s military structure, forces, capabilities and doctrine. This Command is tasked with piloting the “Smart Defense” initiative, launched in 2012 in order to fill the Alliance’s capability shortfalls.

NATO’s command structure is regularly revised to ensure that it is adapted to the Alliance’s evolutionary security environment. The 2018 Brussels Summit was the opportunity to establish a new architecture in order to allow the command structure to refocus on its collective defense mission.

The civil structures are also the object of regular reforms: during the Lisbon Summit, Allies decided to gather the numerous agencies of NATO (14 in total) into three organizations to improve its efficiency. An important milestone was reached in 2012 with the creation of these three organizations (for acquisition, support and communications and for information).

In 1999, at the Washington Summit, heads of States and governments took the decision to build a new headquarters for NATO. This new HQ, still located in Evere, Belgium, was inaugurated during the May 2017 mini-summit.

In 1991 the North Atlantic Cooperation Council saw the light of day; it was renamed the Euro-Atlantic Partnership Council in 1997. In 1994 the Partnership for Peace was set up to encourages partners to develop their defence capabilities and to comply with the requirements of democracy.

In parallel, NATO created the Mediterranean Dialogue in 1994, wthe Istanbul Cooperation Initiative (ICI), a framework for cooperation and dialogue with four Gulf countries, in 2004.

These various initiatives form a network of more than 40 partner countries. 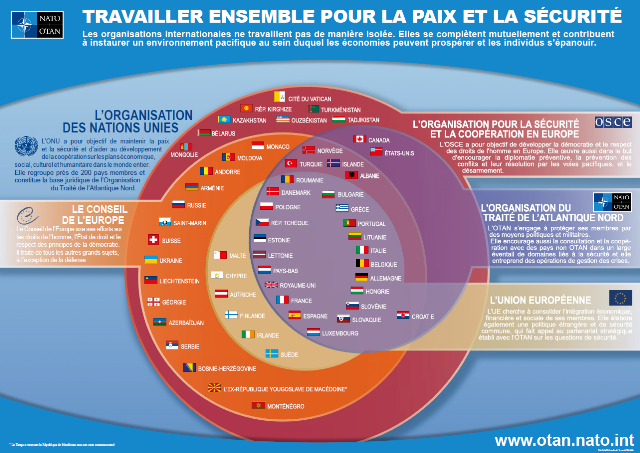 The development of the NATO-EU partnership

In the mid-1990s, NATO established a cooperation with the European Union. In 1996 in Berlin, Allies decided to make NATO assets available to the Western European Union (which, according to the Maastricht Treaty, was tasked with the "elaboration and implementation of the decisions and actions of the EU which have defense implications") for crisis management operations.

After the evolutions in the field of European defense, NATO and the EU started cooperating in the area of defense. The so-called "Berlin-Plus" agreement, adopted in 2003, allows the EU to access NATO’s capabilities for the planning and conduct of operations. Since 2003, this agreement was used in the framework of the EU missions Concordia (former Yugoslav Republic of Macedonia) and Althea (Bosnia and Herzegovina).

The most recent declarations confirmed the commitment of Allies to strengthen cooperation and dialogue between NATO and the European Union, which, according to the 2010 Strategic Concept, is a "unique and essential partner for NATO".

The enlargement of the Alliance after the Cold War

At the moment, Bosnia and Herzegovina, Georgia and the former Yugoslav Republic of Macedonia are candidates for membership, the latter having been invited, during the 2018 Brussels Summit, to begin negotiations to allow the country to become the 30th member of the Alliance. The accession protocol was signed in February 2019 by Allies and henceforth needs to be ratified by all member states of the Alliance.